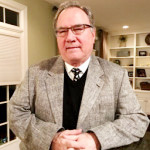 Mike was born in Tacoma, Washington on August 23, 1949, a son of the late Bob Yoemans and Beatrice Yoemans.

Mike is survived by his wife, Sandra Agnor Yoemans; his children, Melissa and Laurie; and several grandchildren. He is also survived by his sister, Debbie; his twin brother, Martin; and brother, Patrick.

He had a long and distinguished career serving his country.

He was a Vietnam-era Army veteran and subsequently worked for the Department of Defense with a cumulative 33 years of service. During his time in the Office of the Secretary of Defense, Mike achieved the prominent level of Senior Executive Service. He was awarded several medals for his work, including the Department of the Army Civilian Service Medal, Secretary of Defense Medal for Outstanding Public Service and Army Commendation Medal. He also taught at the JFK School of Government at Harvard and the National War College to foster the development of others. Mike retired from the government and worked another eight years as a consultant with Advanced Systems Development.

While employed at the Pentagon, he and Sandra lived in Alexandria. They fulfilled their life-long dream of retiring to Lexington in a home with a mountain view in 2011.

In retirement, Mike served his community and church. He held several positions for the Thomas Rogers Society, Boxerwood Nature Center and Rockbridge Area Relief Association. He was also a member of the Richard F. Cato Knights of Columbus in Lexington.

Mike was deeply engaged in his church, St. Patrick Catholic Church, serving on various committees and volunteering his time to make improvements to the facility and technology. Mike enjoyed landscaping and was a member of the Rockbridge Area Master Gardeners Association. He was also skilled in genealogy research and a published author on the history of his Yoemans lineage.

Above all, Mike was a loving husband, father and grandfather and enjoyed having family visit the home he and Sandra shared in Lexington.

A Mass of Christian Burial, officiated by Father Joe D’Aurora, is scheduled for 11 a.m. Tuesday, March 2 at St. Patrick Catholic Church (masks and social distancing are required). A graveside service for the family will follow.

The family requests those who wish to express sympathy to consider making a donation to Boxerwood Nature Center and Woodland Garden, Rockbridge Area Relief Association or St. Patrick Catholic Church in Mike’s name.