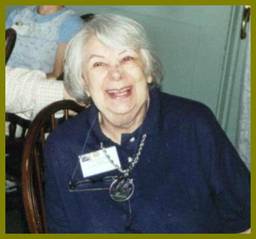 Nancy received her B.S. at Beaver College (now Arcadia University) in Glenside, Pennsylvania.  In 1950 while working as a Home Service Director, she met George Harvey Clark Frederick in Buffalo, New York, and they married in 1951 in Batavia.  After their marriage, they moved to Chicago where Nancy worked as a dietician for SkyChef at Midway Airport and then Marshall Field’s.  In 1954, they moved to Evanston where she lived until June 2008.

Nancy became an avid genealogist, local, state and national level for many groups including DAR, Daughters of American Colonists, Daughters of Colonial Wars, Continental Society Daughters of Indian Wars, Magna Charta Dames and Barons, New England Women, Women Descendants of the Ancient and Honorable Artillery Company, The Huguenot Society of Illinois and Colonial Dames of the XVII Century.  She was a guest speaker for many local and state organizations and has assisted many with their family history, specializing in New York state research.  She volunteered in The Winnetka Library’s Katharine Greely Genealogical Collection for over 30 years.  She volunteered in microfilm and National Archives where she was honored for her efforts with an award from the National Director in Washington, D.C.

As a Thomas Rogers Society member and President of that Society, Nancy worked tirelessly for many years on the sixth and seventh generation project.  She taught genealogy courses through the New Trier High School Extension Program.  When more than 1,000 Illinois names beginning with the letter O were missing when the 1880 Soundex Index were microfilmed, she personally transcribed them from the original cards.  She added name indexes to many books including the History of McHenry County, Illinois, together with sketches of its cities, villages and towns, educational, religious, civil, military and political.  Fred and Nancy had two children, Susan Carol Frederick Small and David Clark Frederick, and three grandchildren.