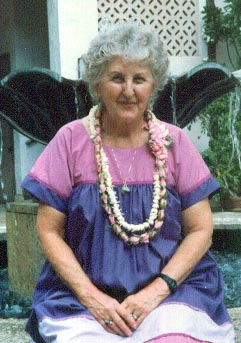 It was a bright sunny Aloha day, when I first ventured into Manoa Valley. I was very excited, as I had just learned that there was an extensive library of information on the early families of New England at the D.A.R. Upon arriving I took all of the research that had been compiled by my great-aunt and my maternal grandmother and entered the inner sanctum of this basement library. As I entered and looked about there was no one else there other than this very focused person seemingly doing major research. She looked up at me as to say, why are you bothering me and I immediately was intimidated.

Little did I know that I had struck genealogy gold!!

Reluctantly I pulled out my information and a chart that I had brought with me. Without a moment’s hesitation, this woman with a twinkle in her eye began going from shelf to shelf pulling out book after book until there must have been some 20 to 30 books surrounding me. She then pointed to several different card catalogs, reference areas and said all you will want is there… start by … By this time, I was considering leaving as you must realize it had probably been more than twenty-five years since I had set foot in a library and I did not have the foggiest idea of where to start.

This was the beginning of what has turned out to be a friendship that I will cherish my whole life. The very focused woman that I had met was Gen Coleman and she has been an inspiration, a teacher (Kumu a`o) and a most dear friend. Gen has helped me as she has 100’s of other aspiring genealogists learn how to find our roots and to really enjoy the journey.

The one thing that you will always have to know when you are a friend of Gen, is that you have to be almost perfect, especially when it comes to spelling and grammar. Neither one of these attributes has been my forte, but with her guidance and with much prodding these have improved immensely over the years.

Now lets learn more about this very faceted woman. Genevieve Coleman is from Amherst, Wisconsin where she grew up. She was however born in Waupaca, WI while her family was visiting her grandfather a blacksmith. Gen was very close to her father and loved him dearly. He was exceptional, becoming a principal at the age of 19. He later became a banker, but when the banks crashed during the depression he returned to teaching. Gen earned her B.S. degree at Stout University with majors in both English and Art. Some of Gen’s first teaching assignments were at Plainview, Minnesota, Melville High School in Wisconsin and the Henry Ford School. Gen taught a variety of subjects, such as physical education, as at that time women had to fill in for the men who were sent of to fight the war.

The next big event for Gen came when her sister asked her to escort her nice to Hawaii. In 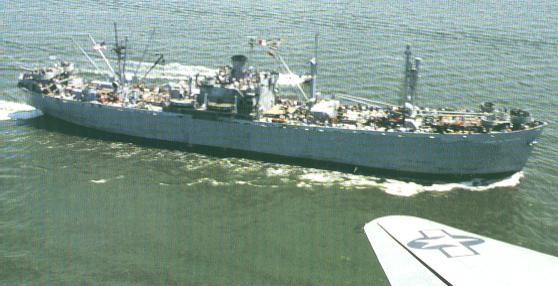 1944 Gen set forth for Hawaii, a trip that was going to change forever where she was to spend her adult life. She and her niece sailed from the west coast on one of the well-known “Liberty Ships” built by Kaiser Permanente. Similar to the ship pictured here. These wartime ships had little or no amenities and this was a dangerous time to be traveling. The ships sailed in convoy with PT boats protecting their safety. Gen however being the adventurous person she is met many interesting persons (one of which was a professional gambler) on the trip and succeeded in winning $80.00 playing poker from those less than suspecting passengers. Prior to arriving Gen and her sister had made arrangements for Gen to teach on the Island of Maui, however when she got there they sent her to Lanai. Though not happy about these events, this wonderful twist of fate was to play her a new hand in the name of Ted Coleman. Just as the sparks began to fly, Ted a Superintendent for Dole, was transferred to California. Hurriedly proposing marriage Ted was off to his new assignment and Gen was soon to receive her engagement ring by U.S. mail. Gen left Lanai to marry Ted in California in 1946. 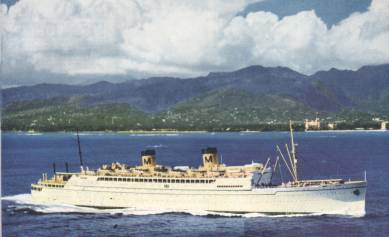 Robert their first child was born in 1946 in California where Ted continued to work for Dole and Gen was substitute teaching. In 1948 Jennifer was born and Gen returned to Hawaii on the S.S. Lurline a much-improved way to travel. Gen, Ted and the two children settled back into their Hawaiian life style and then came Charlie. Ted continued to work for Dole making a major contribution to the Hawaii and Philippine operations. Gen taught for more than 20 years at Leilehua High School retiring in 1975. Gen continued her studies taking courses in English, writing composition, literature and art. She took a sabbatical to attend the University of Wisconsin and later extended courses at BYU in Hawaii.

Though spending a major portion of her life in the islands, Gen has traveled to almost every state in the union. She would love to travel to London and Norway.

Gen’s favorite pastimes other than genealogy are reading, “Don Quixote La Casa La Mancha”, being in her opinion the greatest novel ever, swimming, knitting, and painting. Gen is also very much into science fiction which only adds to an over active imagination. Gen is a wonderful cook and her family enjoys her cooking immensely.

Gen is a member of many organizations but has given the most service to the D.A.R., the Family History Center (driving over 60 miles round trip one day each week for the past 25 years), the THOMAS ROGERS SOCIETY,the Mayflower Society and the Order of the Crown of Charlemagne to name a few.

With many of her past students stopping by to thank her for affecting their lives in a positive way and with the many friends that she has developed over the years, Gen has made a major contribution. However, Gen feels her greatest accomplishment is her family that is continuing to grow. She is expecting her eighth great grand child shortly and currently with the three children, Gen has 7 grandchildren and 7 great grandchildren that are the most significant essentials in her life.

Genevieve Coleman, wife, mother, teacher and friend has made all of us happier and better for knowing her.